Bennett’s Shorefall Offers a Magical Take on Programming and A.I. 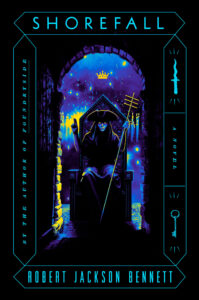 Robert Jackson Bennett isn’t the first fantasy author to describe magic as a way of manipulating creation’s source code, but he is the first I’ve read who overlays the idea with an artificially intelligent villain. In Shorefall, the second installment to his Foundryside series, he imagines a world where sorcerers have hacked into the subroutines of reality so effectively their magic has developed a mind of its own.

Great writers weave social commentary into their work and Bennett is no exception. His fictitious city, Tevanne, is ruled by family-owned corporations who vie for control of the most talented scrivers, those who develop the complex assembly of sigils that allow objects to defy reality. Notoriously difficult (and dangerous!) to develop, the corporations jealously guard their perfected scrivings and the sale of scrived artifacts, called “rigs,” supports the families’ vast wealth.

It’s no stretch for readers to see in Tevanne an exaggerated reflection of real-world tech hubs like Seattle or Silicon Valley. The campos, too, tell a cautionary tale of what corporations like Microsoft, Google and Amazon might become if left unfettered. Bennett further magnifies the allusion by weaving in story details about the social unrest stirring in Tevanne over the offshore slave labor that supports the wealthy, a callback to American dependence on questionably sourced but inexpensive supplied imports.

Shorefall’s plot picks up a few years after the conclusion of Foundryside’s which saw reluctant heroine Sancia Grado and her band of outcast scrivers rattling Tevanne society not only by opening their own, independent scriving corporation, but also because they freely share scriving secrets with anyone willing to share in return.

The book begins with a bit of corporate espionage on the part of our protagonists who seek to gain access to the Michiel Body Corporate’s closely protected scriving lexicon. They hope to further expose the secrets upon which the families have built their power and wealth as part of their plan to bring greater equality to Tevanne. Their strategy goes awry when Sancia is contacted by Valeria (whom I couldn’t help but think of as Alexa or Siri), a rig so powerful that it has gained self-awareness. She warns the team that a hierophant, one of the world’s first and most powerful sorcerers, has been resurrected and is coming to Tevanne.

The rest of the novel chronicles Sancia and her cohorts’ battle of wits with a man who would be god, and the sentient code string he created, Valeria, who has come to believe that the only way she can fulfill her prime directive—to protect humanity from its self-destructive tendencies—is to oppose the being who created her. Along the way, Sancia and her friends grapple with questions of freewill and the degree to which any human, themselves included, can be trusted with power. Clearly part of a trilogy (or more), the book ends on something of a cliff-hanger, but it is no less satisfying for being an incomplete tale.

I have been an enormous fan of Bennett’s since devouring his Divine Cities trilogy. He has an adept hand for creating believable, 3-dimensional characters and complex but engaging plots. As a fantasy author, the magical systems he invents are compelling and original. The way Sancia hacks scrived rigs, for example is at time amusing, brilliant or both. The worlds he builds feel alive with culture and history, incorporating sophisticated detail about exotic foods, a layered culture of haves and have-nots, and customs and traditions founded on a rich and fully developed history.

I’m hard pressed to find something to critique about his writing, but if I had to, I might point to the romance between Sancia and Berneice as the novel’s one shortcoming. While Bennett makes both characters compelling individually, the relationship between the two seems a bit hollow. That emptiness may have been intentional: Sancia is an escaped slave who was living a hard life as a thief in the previous novel, someone who very well could struggle to express her feelings and build meaningful connections with others–a concept Bennett actually explores in the story. On the other hand, this small lack could be a byproduct of a man attempting to describe love between two women without proper context.

Given the excellence of his work, I’m inclined to give Bennett the benefit of the doubt.

If you’re new to Bennett’s work, Foundryside and Shorefall offer excellent introductions to his storytelling and I’d recommend reading them before tackling the Divine Cities trilogy. His earlier works are, in my estimation, superior books (and that’s saying something!), but their plots are denser and more complex. The action of the heist tales in Shorefall and its predecessor offer faster-paced reads and easier to digest yarns.

To check out Bennett’s books, visit Bookshop.org where a portion of every sale goes to support independent bookstore owners nationwide.