Secrets of the Script 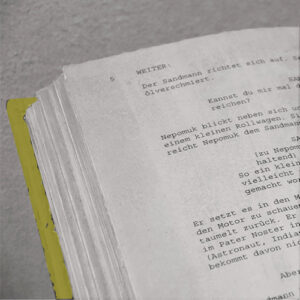 Once upon a time I worked with an awful person.

I’ll spare you the details because, probably, you’ve worked with someone just like her. She’s the one who knows what the boss had for breakfast but can’t remember your name. She can recite the company mission statement but can’t answer a simple question. She has the annoying habit of misplacing her knives in the middle of your back.

And she gets promoted. A lot.

I could never figure that last part out, because I always thought her terribleness seemed obvious. But I certainly couldn’t argue with her success. That was why I became her most devoted (albeit secret) student, and how I discovered The Script.

The initial thing I noticed was that, in every meeting with the Very Important People, once they’d finished proselytizing, she always threw up her hand with the first question. I also realized she asked the same thing every time. Eventually I came to understand the brilliance of her strategy.

[FLING HAND IN THE AIR BEFORE QUESTIONS ARE CALLED FOR.]

“Thank you so much! First of all, before I ask my question, I just want to say—and I think I speak for everyone here [STAND AND GESTURE MAGNANIMOUSLY TO THE AUDIENCE]—that your talk was amazing. You’re really thinking about [INSERT TOPIC OF THE MEETING] in a completely new and different way.

“Now for my question: Are you familiar with the work [NAME OF OTHER KEY EXECUTIVE] is doing on [TOP CORPORATE INITIATIVE]? It seems like there are so many synergies between the two efforts. Could you comment?”

I know. I’m queasy, too. But let’s not dismiss our frenemy out of hand. There is a lot she can teach us. I took away three things from watching her:

According to a 2018 study by the consulting firm West Monroe, one in three managers had no training at all before taking a management job. More than half had less than one day’s worth. It’s not surprising then that leaders, even at the executive level, can feel anxious about their performance.

I was fortunate that my first management job came with not only a lot of training—the company I worked for at the time valued that—but also a fantastic boss who invested a lot of time in mentorship. I recognize now how rare that was. Subsequent leadership roles I’ve had at other firms offered next to no training. In fact, new managers who asked about classes were often teased about “fluff” and accused of looking for ways to get out of work.

The insecure managers resulting from this environment present a unique opportunity and challenging responsibility to the people who work for them. An article on the professional women’s site Career Contessa suggests, “If you learn through working with this type of boss what you can say or do to help boost their confidence, the time you spend at work will be improved not just for yourself but for your entire team.”

In other words, stroking the boss’s ego is good for everyone.

Whether she did it instinctively, accidentally or strategically, my awful colleague recognized this dynamic and hit it squarely on the head with the opening line of her Script:

“Your talk was amazing. You’re really thinking about [INSERT TOPIC OF THE MEETING] in a completely new and different way.”

I can tell you from personal experience, even the senior-most execs lit up like Christmas trees when they heard those words.

2. It pays to be the spokesperson.

In her article “3 Times You Should Speak First at Work (And 3 Times You Shouldn’t),” career coach Lea McLeod suggests that being the first person to speak is the key to corporate meeting success. “Waiting until the end,” she writes, “after everyone else has contributed—means you’ll end up comparing your comments to those that have already been made and stressing about adding anything of importance.”

This was the next lesson I learned from my terrible co-worker. By speaking first and, more significantly, claiming to talk for the rest of the room, she not only set the tone for the remainder of the conversation, but she also implied that she led the rest of us.

And she did a good job of it, too. It wasn’t as though any of us were likely to stand and say, “Wait a minute, she doesn’t speak for me. I didn’t think your talk was amazing at all.” By sitting there quietly, we were acquiescing to her as our representative.

3. Strategy is about making connections.

In all of that management training I did, we talked a lot about generating creative ideas to bolster strategy. We used a lot of tools. For example, we tackled problems from fresh points of view: How would Ghandi solve this problem compared to how General Patton would? We applied extremes: What would we do if we had to cut our staff in half? What if new business tripled?

These exercises were about disrupting the status quo so that we looked at situations with fresh eyes, hopefully generating different and better ideas. On-line management training platform MindTools describes the technique in three steps:

With the last line of her script, “Are you familiar with the work [NAME OF OTHER KEY EXECUTIVE] is doing on [TOP CORPORATE INITIATIVE]? It seems like there are so many synergies between the two efforts,” my horrible work associate did exactly that.

More than once, the person she asked the question of raised a thoughtful eyebrow, the wheels obviously beginning to turn. Sure, sometimes the speaker just looked puzzled, but even then, he or she usually said something like, “that’s interesting. I hadn’t thought of it that way.”

It didn’t matter that these execs weren’t hearing a tangible strategic thought. What they were hearing was a process to get to a tangible idea and they viewed that as just as valuable.

Now, don’t let me oversell my frenemy. True, I do have to admit that her Script not only works, but works very well. In fact, I’ve shared it with friends and, usually, the response is “that’s so obvious. There’s no way people fall for that.”

Nine times out of ten, those who do try it tell me, “You won’t believe this, but I used The Script in our staff meeting and the boss asked me to stay after to discuss my ideas. It worked like a charm!”

And it does. Still, there’s a rub.

Ultimately The Script’s awful author got fired. Sure, she’d been promoted a whole bunch of times before that, but eventually she took a job where her inexperience and lack of genuine substance couldn’t be disguised with clever word play.

In order for The Script to genuinely succeed, and succeed long term, it has to be backed up by something real. Yes, it’s good to give the boss kudos, but only if they are truly deserved and you feel committed to helping him or her succeed. Yes, being the spokesperson will get you noticed, but only if you can speak with actual substance behind your thoughts. And, yes, making unexpected connections can generate innovative thinking, but only if there’s a real idea and not simply a forced link between two spotlighted corporate initiatives.

Now you have the power of The Script for your very own. Try to use that power for good.

Photo by Waldemar Brandt on Unsplash