Forgiveness May Not Be All It’s Cracked Up to Be 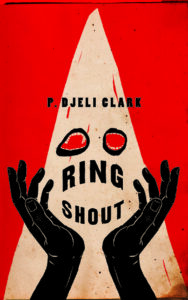 Some authors are just too kind to the monsters. Nebula and LOCUS award-winner P. Djèlí Clark certainly is in his latest novel, Ring Shout.

Ring Shout reimagines the birth of the Ku Klux Klan as a Lovecraftian horror-story. In Clark’s alternate history, defeated Confederates summon demons with dark sorcery, aware—or perhaps not—that the monsters feed on human hatred. The devils infiltrate their white supremacist hosts, slowly transforming them from Klansmen into Ku Kluxes, twisted, many-mouthed terrors that only those few gifted with mystic sight recognize as no longer human.

As a dark fantasy, Ring Shout deploys all the best tropes. We follow a chosen heroine, Maryse Boudreaux, as she battles savagely to not only protect her people from the monsters, but redeem herself from failing to save her family. Her companions are scientific and sorcerous. She makes treaties with divinities both light and dark. She barters her soul to protect those she loves.

It’s a great read. But there are a few bumps along the way—caused not by what’s in the story, but by what’s been left out. The book offers tantalizing glimpses of a much larger, richer world, but only as a tease. Molly Hogan, the self-taught steampunk scientist, makes just a few short appearances, but those brief interludes hint at an intriguing storyline all her own. Sharpshooter Sadie loves tabloids and their wild claims about government conspiracies that may prove to be more true than her fellow freedom fighters want to believe. Emma Krauss, a widowed German shopkeeper and Jew, finds kindred spirits in the black community and tries to convince her them that socialism is the key to resolving race relations. Any of these plot threads could be spun into something far more significant; they could all have been used to build a more significant world.

Clark, made famous by his short stories and novellas, manages a tight narrative. The action is focused and fast-paced and he packs volumes into every word. But, at only 181 pages, Ring Shout sometimes feels like a tale that got too big for the author’s usual short format and wasn’t allowed to blossom into the more robust work it could have been.

Don’t get me wrong: Clark is still an amazing writer. He has a particular gift for dialect and gives every character a distinct voice. Nana Jean, the magical moonshiner whose power draws women with the sight together to battle Ku Kluxes speaks an almost unintelligible pidgin called Gullah. But the reader hardly struggles with her indecipherable exchanges. Clark seamlessly weaves it together with dialogue from other characters to give context that tells readers exactly what Nana Jean is saying. The mystery of how she says it only adds to her intrigue. Indeed, every actor in the book, no matter how briefly we meet them, feels fully fleshed out and real.

More important, and more valuable, than the plot development and characterization, though, is the social commentary. Clark so effortlessly builds life lessons into his writing that you almost don’t realize you’re being taught a thing or two. From Sadie’s puzzled question, “Jews is white folk?” to the demon’s description of klan hatred as “watered down whiskey,” Clark treats the ugliness of racism as something almost to be pitied. In fact, Nana Jean forbids Maryse and her band from killing any Klansmen that have not yet transitioned to Ku Kluxes. In a way, the women fight to save their enemies almost as much as themselves. It’s a noble view, but one that is perhaps too forgiving of the evil being done not by monsters, but by men.

If you’re thinking of reading Ring Shout, and I suggest you do; consider buying your copy from Bookshop.org where a portion of sales proceeds goes to support independent book sellers.