A Little of the Ol’ Ultra-violence for the Evolved Man 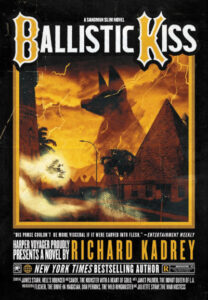 This will be a review of Richard Kadrey’s newest Sandman Slim novel, Ballistic Kiss.

But first, a personal story:

A very good friend of mine recently confessed his addiction to reruns of the late 90s television hit, Felicity. The series was named by Time magazine as one of TV’s 100 all-time best shows. It tells the title character’s coming of age story as she flees her wealthy parents’ Palo Alto home to follow a boy and her dreams on a journey of self-discovery to New York City.

Upon learning that this was my friend’s new favorite show, I demanded he surrender his Man Card immediately.

“But dude,” he tells me. “Felicity was created by J. J. Abrams. You know, the guy behind the Star Trek re-boot and the Star Wars sequels?”

“Does Felicity fight aliens or, at a minimum, have super powers?”

“Give me your card.”

“Well, what about this?” He texts me a gif of Felicity’s smitten boyfriend, walking backward, waving goodbye, a besotted smile on his face. As Felicity watches, the unobservant half-wit gets mowed down by a bus.

“Well, that’s promising. Does one of her doe-eyed schmuck beaus bite it in every episode?”

My friend then went on to talk about The Gilmore Girls. Apparently, he likes them, too.

I fear he may never get that Man Card back…

So, other than suggest some potentially toxic masculinity on my part (that I should probably have checked out), what does this story have to do with Kadrey’s latest entry in the Sandman Slim series? Especially when you recall that NPR reviewer Jason Heller once described the collection as having “brains, guts and a deliciously blackened heart?”

Maybe nothing. Maybe everything.

In Ballistic Kiss, the horrors chronicled by the previous ten novels have finally caught up with our anti-hero Sandman Slim, better known to his friends as James Stark. Half-angel, half-human Stark who, in previous adventures, battled his way out of Hell, returned to Hell to rule as the new Lucifer, then returned to Earth to shame a slacking God into taking back up his Heavenly duties (with a few other world-saving adventures in between), now suffers from PTSD. To make matters worse, his long-time friends, in particular, his lover Candy, all believed he was years-dead after the events of the last novel. They know he’s back but, in the meantime, they moved on with their lives, leaving a lonely Stark to find solace in whiskey, doughnuts, and, possibly, Janet, the non-binary potential love interest who sells him his deep-fried treats.

The rest of the novel follows the standard, albeit delightful, Sandman Slim recipe: Stark is drawn into a supernatural mystery. He meets a bizarre cast of characters living along the fringes of L.A. society. Celestial entities play coy. An unnerving amount of blood and entrails spray. Stark gets drunk. A lot. He solves the mystery, but at what price?

But that’s not really why I forgive the writing foibles and gobble up Kadrey’s books the moment they’re published. As much as I love lunatics and decapitations, it’s the evolution of Stark’s character that keeps readers like me coming back for more. In Ballistic Kiss, we get to see the softer side of our favorite ass-kicker. He takes medication for his PTSD. He stress-eats a stale Christmas yule log cake. He’s crippled by panic attacks when he plans a small movie watching party. As Stark learns to manage his emotions, we witness the tough guy becoming tougher but in a very different way than depicted by the brutal groin punches and eviscerations in the previous books.

Perhaps most telling about Stark’s evolution is his un-hesitant acceptance of Janet’s gender neutrality. He struggles to remember the proper pronouns, slipping with the occasional she rather than the preferred they, but he commits to getting it right. He catches himself and he corrects himself.

Ultimately, Stark is not a role model for kids. He considers murder a reasonable solution to many problems. He enjoys the convenience of grand theft auto for his transportation needs. And he suffers, theoretically, from an addiction to a hellish, literally, brand of cigarettes called Maledictions. But there is definite inspiration to be found in the way Stark genuinely cares for his friends and willingly accepts people’s differences at face value.

Unless and until he’s forced to kill them, of course.

So, maybe, after reading Ballistic Kiss, I understand a little more about my friend’s love for Felicity: Come for the horrific bus accident. Stay for the emotional growth. Perhaps I’ll have to surrender my Man Card. Or maybe I should just return my friend’s.

If you’d like to read Ballistic Kiss, consider buying a copy from Bookshop.org where a portion of proceeds go to help support independent booksellers and authors like me. You can go there by clicking here.